Keeping safe while bending parts fast on a press brake

Keeping safe while bending parts fast on a press brake 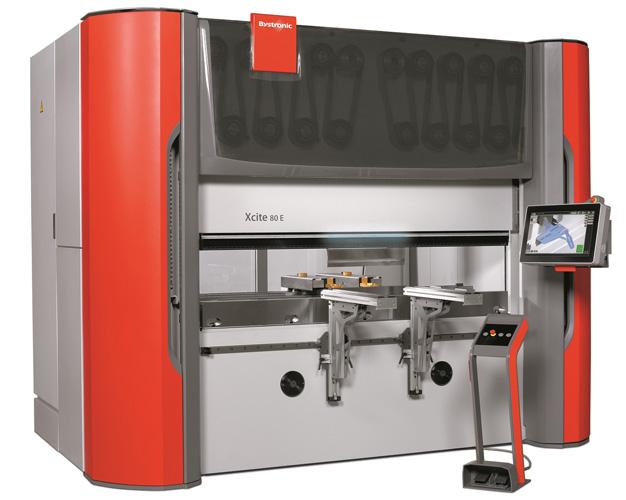 Figure 1
Parts can be processed up to two times faster on an electric press brake when compared to a traditional hydraulic press brake.

Historically, most of the developments in press brake technology have been focused on setup times. Changing market requirements forced fabricators to look for more cost-effective ways to address smaller lot sizes. In the 1990s OEMs and their suppliers were no longer interested in carrying large inventory levels through downturns in the economy, and as a result, they put more just-in-time demands on the backs of fabricators.

Today the industry is seeing the proliferation of high-speed fiber laser cutting technology, which also is making another significant impact on the sheet metal industry. Fiber lasers are capable of producing more than twice the parts as the classic industry-standard CO2 laser in the same amount of cutting time. Because of this dramatic change in cutting capabilities, other sheet metal-related fabricating processes inevitably had to adapt as well.

For many fabricators, the next downstream operation after cutting is the bending of those parts on a press brake. However, simply increasing the ram speeds is not the ultimate solution for keeping pace with increasing customer demands and faster laser cutting machines. Increasing overall productivity, without compromising operator safety, is the goal. This is where technology lends a hand.

The Emergence of the Electric Press Brake

Obviously, improving the press drive does have a lot to do with productivity. The newest technology for bending parts faster is the so-called electric press drive (see Figure 1). Electric press drive, or electric press brake, refers to a direct-acting press drive in which turns of the motor are directly related to ram movement. This usually is accomplished through massive mechanical gear reduction. The ram speeds achievable are higher with this direct-drive technology. Much of the productivity gains are from the ram’s ability to accelerate rapidly; with this scenario, of course, the ram also rapidly decelerates to keep the operator safe.

Electric press brakes are about twice as productive as a conventional hydraulic press brake. This is in step with the production increases associated with the fiber laser cutting technology.

A Vision of Safety

Light curtains have been used for decades to protect the operator. They create a virtual barrier across the front of the machine. If the operator inadvertently places any part of his body in the guarded zone, the ram is disabled. Because most of these barriers are based on a single point of physical light interruption, they cannot distinguish between the partially formed blank and any part of the operator. Because of this, the press brake operator often manually mutes the barrier zone or completely shuts off the entire guarding system.

Because of this false security with light curtains, laser- and vision-type guarding systems have been introduced (see Figure 2). These systems are “smarter” than conventional light curtains. For example, they can recognize the difference between a bent flange on a four-sided box and the operator’s hand under the punch. Vision-type systems also tend to allow uninterrupted bending of shorter front flanges too. The laser-type systems act like a limit switch: Break the beam and the ram stops.

An important advantage of vision systems is that they allow the ram to stay in the high approach speed longer before shifting to the slower bending speed. This feature alone reduces the ram cycle time by another 20 percent when compared to traditional hydraulic press brakes.

Some vision systems even resize the safety zone in front of the punch automatically according to ram speed. Each stroke is then optimized even further.  Germany Pilz CNC Pressbrake Laser Guarding System 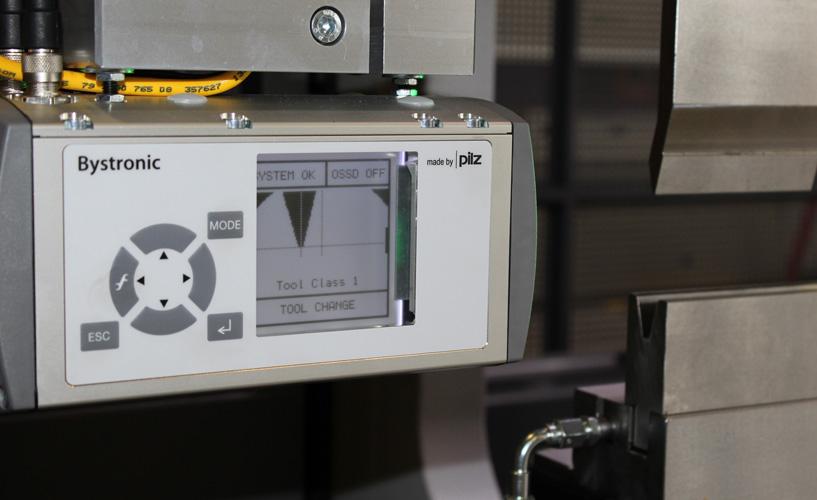 The vision-based systems not only react faster than conventional light guards, but they also tend to have more features because they “see” more information. For example, image systems can be used to verify punch height and punch angle. If the vision safety system does not recognize a tool, the machine stops. This greatly reduces the possibility of shattering improperly installed tooling.

Technology also is being used to simultaneously address the inherent risks in working with these high-performance machines. The most spectacular improvement is the divergence away from the so-called numerical control (NC) to the graphic control.

Classic NC press brakes inform the operator about the process cycle in numbers. Press brakes, meanwhile, have evolved into multiaxis machines. It’s not unusual to have four to six axes of automated control on a backgauge alone. The vast amount of numbers now displayed to the operator is overwhelming and sometimes indecipherable, especially when working in non-native units, such as millimeters for U.S. operators.

The most advanced graphic controls now supply the operator with detailed scale models. The operator sees a preview of the process (see Figure 3), and what he sees is what he gets when he presses the pedal. This alerts the operator of the backgauge potentially pushing the sheet into him.

An example of how this sort of graphic control can make a difference is when the part collides with the press brake during bending (see Figure 4). It is extremely important that the press brake operator be aware of when and where these collisions or secondary pinch points may occur.

The environment around the press brake usually contains stacks of flat blanks, baskets of formed parts, worktables, toolboxes, and front sheet supports connected to the press brake. All of these items are potential hazards when parts are being formed faster. Technology can be used to identify the size and shape of the danger zone for each different part. For instance, when flanges are present in the center of the part, the front flange forms down (see Figure 5). Even some of the most experienced operators do not anticipate when the part will move down during bending.

Electric press brakes also are linked to reduced energy costs, but this too can apply to conventional hydraulic press brakes thanks to advanced technology. Variable-frequency emulators are placed upstream on the power supply for the main motor. Instead of running the pump/motor group at a constant alternating current of 60 cycles per second, the variable-frequency emulator gradually changes the motor speed by gradually increasing or decreasing the frequency of the AC. This process creates a dynamic system because the speed is controlled by the cycles per minute of the AC, not the voltage. Energy consumption is reduced in the range of 30 percent.

Higher productivities in larger machines create other safety issues. Larger parts processed faster means the operators wear out faster too. Some progressive production shops now rotate their operators off the press brake to give them a break from all of the heavy lifting. Technology can help here.

Dynamic sheet supports can be added to do the heavy lifting (see Figure 6). The operator simply places the plate against the backgauge stops and presses the pedal. The lifting is synchronized automatically with the ram movement. Because of the rotating and drawing movements of the material during bending, another three axes of motion control are required to ensure harmonized movement between the plate and lifter. 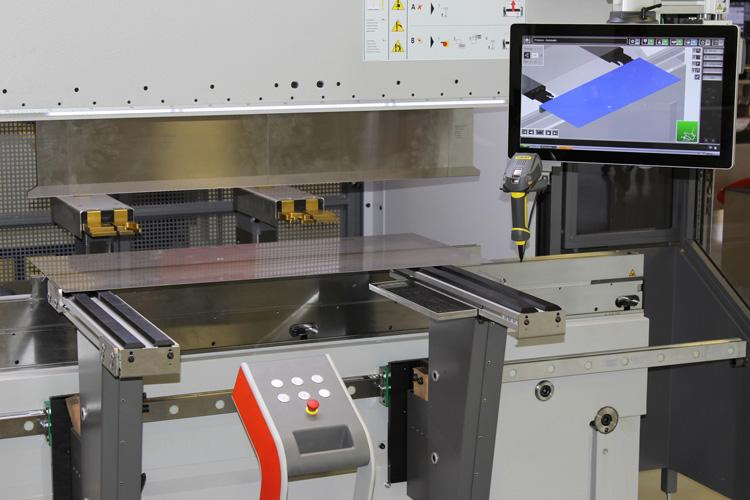 Figure 3
An improperly placed blank is ejected from the front of the press brake when the cycle is initiated.

Dynamic sheet supports also improve quality by eliminating the possibility of a back-bend when the operator does not support the part correctly through the entire ram cycle.

Technology is changing the shape of tooling too. Most modern press brakes are equipped with a power tool clamping system. These systems primarily affect setup time by not only reducing the time loss from tightening the screws, but also by automatically seating the tools in the home position, thus eliminating the possibility of improperly installed tools.

Most precision-ground tooling manufacturers use some sort of safety catch to protect the operator from falling tools. A full-length dovetail catch is a new feature introduced to the North American market (see Figure 7). This system not only protects the punch from dropping if the clamping is opened when the ram is up, but also allows for front vertical installation and removal of any punch size or weight.

Another notable safety and productivity feature is that side horizontal installation and removal are improved because of the full-length dovetail slide.

Overall, recent advances in technology have made it easier for fabricators’ bending operations to keep pace with today’s faster cutting systems, while at the same time significantly improving operator safety. 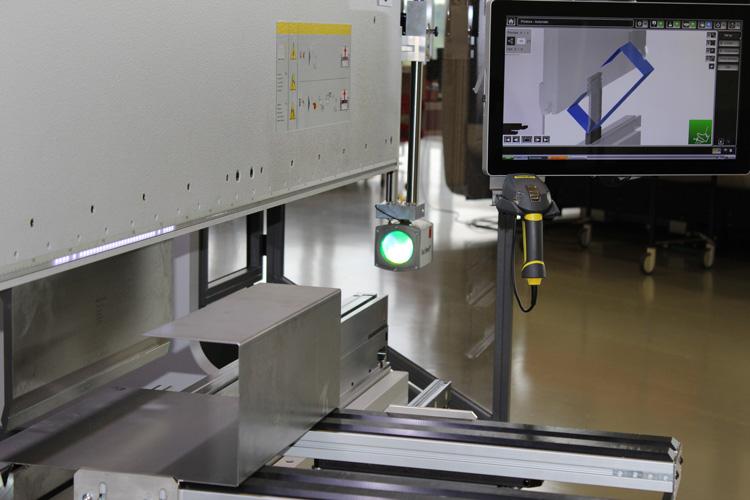 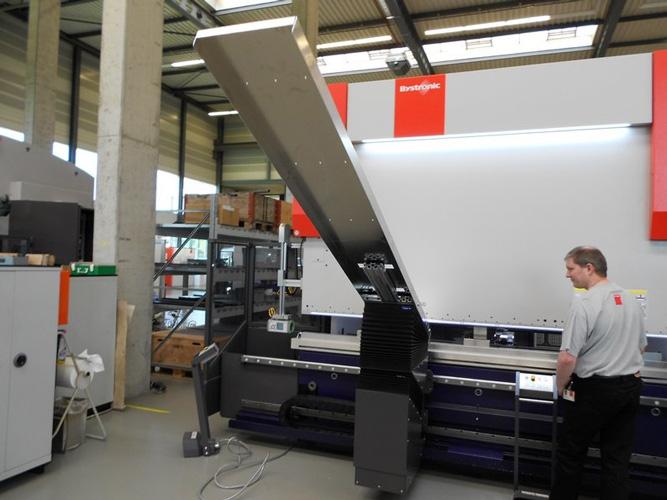 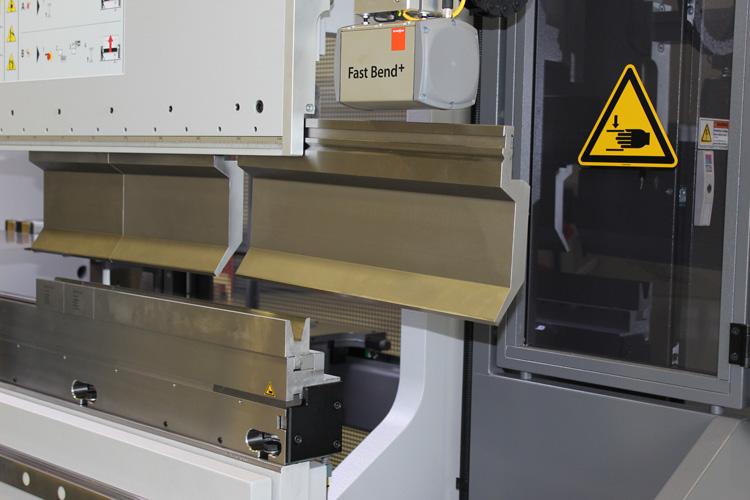