The leading trend in press brake safety is to protect the operator without sacrificing speed or hampering operators' ability to work productively, according to press brake and safety equipment manufacturers.

This goal is achieved with tooling, including segmented or sectionalized tooling that is lighter and more manageable; safety features that prevent unsecured tooling from falling; and flexible tooling designs that require fewer tool changes. It is further achieved with light curtains, camera and vision-based sensors, automation and robots, and mechanical side and rear guards. 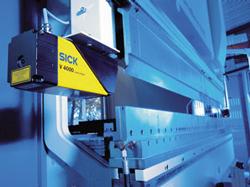 LazerSafe uses two flat bands of 40-mm-wide laser light to monitor the zone below the punch, explained Ashok Bhide, Honeywell Wintriss product manager (see Figure 1). It can detect obstructions as small as 4 mm while still being tolerant to vibration. The width of the laser beams and the location of the transmitter and receiver, which are mounted on the ram of the press, provide the operator with enough room to work safely within 20 mm of the punch.

LazerSafe can mute front and rear beam sections selectively to eliminate the need for program changes. Muting front and rear sections of the laser bands and allowing the middle section of the laser to monitor the punch for safety give the operator the opportunity to bend box shapes without setting off an alarm.

Muting of the laser beams' rear section allows the backgauge to be ignored as an obstruction in jobs that require only a short bend. These features contribute to greater throughput without compromising operator safety, Bhide said.

Vision-based safety equipment is another option for press brake safety. SICK's V4000 is equipped with a camera sensor that mounts on the press brake's upper ram, providing safeguarding during the downward movement of the ram (see Figure 2). The system creates a safety volume below the punch that is monitored for intrusion. The safety output provides a signal to stop the downward movement of the ram as soon as an intruding object is detected. The system uses existing linear scales to calculate machine-relevant information such as the upper beam's position, velocity direction, and the machine's stopping distance.

An important aspect of press brake safety is the tooling system and how those tools are loaded onto the machine, clamped, and seated, Gunter Glocker, president, Wila USA said.

"Traditional American planer-made, 10- to 12-foot-long tooling is heavy and cumbersome for the operator to handle and often requires more than one operator to load and unload into the press brake," Glocker said.

Segmented tools are no longer than 36 inches in length—some are as short as 1 in. This segmentation reduces the weight of any single tool and makes it possible for one operator to handle the tools, Glocker said.

Most are available with a safety pin that prevents the tool from falling out of the ram or clamping system. Also, hydraulic clamping systems clamp, seat, and align both the punches and dies automatically.

"This improves the operator safety because he does not have to manually realign tools or to bring the ram down to seat the tools," he said.

Wila's ram and bed clamping systems and tooling with safety pins and self-seating features have recently been expanded for use with American-style precision tooling, Glocker said.

Punches are engineered with safety tangs to prevent them from falling out of the upper beam even when they are not clamped down. "This reduces the risk of injury during press brake setups and teardowns," Campbell said.

Lighter tools have push-buttons that retract the safety tang and allow for simplified vertical load and unload. Larger, heavier punches, however, are equipped with solid safety tangs that require the operator to slide the tool out from the end.

"Due to their weight, it's safer to remove larger tools this way rather than releasing vertically," he added. 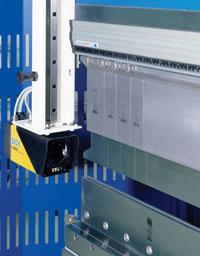 SICK's V4000 is equipped with a camera sensor that mounts on the press brake's upper ram. The area below the punch is constantly monitored for intrusion, and a signal switches off the machine as soon as an intruding object is detected.

Wilson recently introduced the PowerExpress, a hydraulic upper beam clamping and self-seating system (seeFigure 5). It comes in 2-foot-long sections, and a single press brake operator can set up the system in less than an hour, Campbell said.

"We also are in the process of developing a companion piece—a modular lower die-holding unit," he added.

In addition, most brakes that are 220 tons and lighter are now electric-powered, providing direct control of the ram at all times.

"It is impossible for the ram to come down inadvertently without power due to heavy-duty safety springs," Stock said.

Jonathan Chomicz, a TRUMPF Inc. press brake sales engineer, said that today's safety technology does not hamper the speed or productivity of the machine, or constrict operators' movements by confining them to "secure areas" in front of brakes.

"TRUMPF has been able to integrate the function of our safety system directly with the operation of the machine," Chomicz said. "By doing this, we have made the operation of this system safe and easy to use, even for operators without a lot of bending experience."

Casey Schlachter, press brake manager for Bystronic Inc., said, "The trick is to have an effective system that does not slow the production down." A new laser light guard system, called AKAS, works with two to three laser lights centered about the upper punch tip that allow fingers to be as close as 1 in. away from the pinch point, yet be completely safe, he added.

The company also has standard gates at the side and rear of all press brakes that stop the ram and backgauge if opened, he said.

Bystronic's software has pressure referencing technology that reads overloads in bending pressure, which may occur when a too-thick sheet sits over the V die, he said. Sheet thickness is measured during the pinching phase of bending.